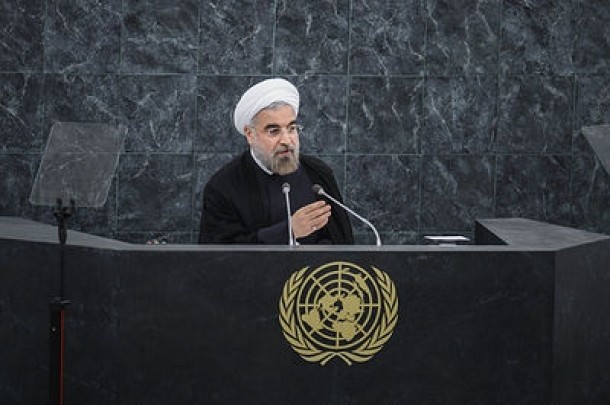 A world against violence and violent extremism

Guided by the purposes and principles set forth in the Charter of the United
Nations and the Universal Declaration of Human Rights,

Reaffirming that the purposes and principles embodied in the Charter include, inter alia, to develop friendly relations among nations based on respect for the principle of equal rights and self-determination of peoples, to take other appropriate measures to strengthen universal peace, and to achieve international cooperation in solving international problems of an economic, social, cultural or humanitarian character, and in promoting and encouraging respect for human rights and for fundamental freedoms for all without distinction of any kind such as to race, colour, sex, language, religion, political or other opinions, national or social origin, property, birth or other status,

Underlining that all Member States have undertaken to refrain in their international relations from the threat or use of force against the territorial integrity or political independence of any State, or in any other manner inconsistent with the purposes of the United Nations,

Alarmed by the acts of intolerance, violent extremism, violence, including sectarian violence, and terrorism in various parts of the world, which claim innocent lives, cause destruction and displace people, and rejecting the use of violence, regardless of any motivation,

Reaffirming the commitment made by all States under the Charter to promote and encourage universal respect for and observance of all human rights and fundamental freedoms without distinction and reaffirming also that States are under the obligation to protect and respect all human rights and fundamental freedoms of all persons,

Convinced that wars and armed conflicts can lead to radicalization and the spread of violent extremism and disrupt development of human societies and thwart the well-being of humankind,

Recognizing that a primary responsibility of each State is to ensure a peaceful and violence-free life for its people, while fully respecting their human rights without distinction of any kind, to live together in peace with its neighbours, in full respect for political independence and the principle of sovereign equality of others, and to help maintain international peace and security,

Recalling that the Charter affirms in its preamble that to practice tolerance is one of the principles to be applied to attain the ends pursued by the United Nations of preventing war and maintaining peace, and convinced that the respect for and protection of all human rights and fundamental freedoms of all persons as well as tolerance, the recognition and appreciation of others and the ability to live together with and to listen to others, form a sound foundation of any society and of peace,

Welcoming the efforts made by the Secretary-General and his High Representative for the Alliance of Civilizations to promote greater understanding and respect among civilizations, cultures and religions,

Reaffirming that violent extremism constitutes a serious common concern for all Member States, threatening the security and well-being of human societies, and convinced that there is no justification for violent extremism, whatever the motivation,

Recognizing the need for a comprehensive approach to countering violent extremism and addressing the conditions conducive to its spread,

Stressing that States must ensure that any measure taken to combat violent extremism complies with their obligations under international law, in particular international human rights, refugee and humanitarian law, and underscoring that counter-terrorism measures and the protection of human rights, fundamental freedoms and the rule of law are not conflicting goals, but complementary and mutually reinforcing, and are an essential part of a successful effort to counter violent extremism,

Recognizing the commitment of all religions to peace, and determined to condemn violent extremism, which spreads hate and threatens lives,

Reaffirming that violent extremism, in all its forms and manifestations, cannot and should not be associated with any religion, nationality, civilization or ethnic group,

2. Condemns the targeting of civilian populations, including women and children, in violation of international law, in particular human rights and humanitarian law, including by violent extremists, as well as the attempts to disrupt and divert the popular quest for political reform, moderation and inclusive development in different societies and drive it away from the hard work of development towards violence;

3. Deplores attacks on religious places and shrines and cultural sites in violation of international law, in particular human rights and humanitarian law, including any deliberate destruction of relics and monuments;

4. Urges all Member States to unite against violent extremism in all its forms and manifestations as well as sectarian violence, encourages the efforts of leaders to discuss within their communities the causes of violent extremism and discrimination and evolve strategies to address these causes, and underlines that States, regional organizations, non-governmental organizations, religious bodies and the media have an important role to play in promoting tolerance and respect for religious and cultural diversity;

5. Stresses that it is important that States strongly condemn all forms of violence against women and refrain from invoking any custom, tradition or religious consideration to avoid their obligations with respect to its elimination, as set out in the Declaration on the Elimination of Violence against Women; 3

6. Encourages all States and international organizations to generate public awareness, enlighten the public about the dangers of intolerance and sectarian violence and react with renewed commitment and action in support of the promotion of tolerance and human rights, and invites them to continue to pay attention to the importance of mutual cooperation, understanding and dialogue in ensuring the promotion of moderation and tolerance and respect for human rights;

7. Calls upon all States to respect and protect in their fight against violent extremism, all human rights and fundamental freedoms and the rule of law and to support all actions at the local, national, regional and international levels, in cooperation with civil society, to foster understanding, tolerance and non-violence, inter alia, through programmes and institutions in the fields of education, science, culture, communication and information, strengthen democratic institutions, ensure the all-inclusiveness of the development process, eliminate all forms of intolerance and violence, eradicate poverty and illiteracy and reduce inequalities within and among nations in order to leave no one behind;

8. Underlines the vital importance of education, including human rights education, as the most effective means of promoting tolerance, in preventing the spread of extremism by instilling respect for life and promoting the practice of non-violence, moderation, dialogue and cooperation and encourages all States, the specialized agencies of the United Nations and intergovernmental and non-governmental organizations to contribute actively to this endeavour by, inter alia, placing emphasis on civic education, and life skills as well as democratic principles and practices at all levels of formal, informal and non-formal education;

9. Recommends promoting community engagement in countering violent extremism, including by strengthening ties between communities and emphasizing their common bonds and interests;

10. Calls upon Member States to advocate for and disseminate information on tolerance and mutual respect, and underlines the potential contribution of the media and new communications technologies, including the Internet, to promoting respect for all human rights, to developing a better understanding among all religions, beliefs, cultures and peoples, to enhancing tolerance and mutual respect and thus to strengthening the rejection of violent extremism;

11. Recognizes the positive contribution that the exercise of the right to freedom of expression, particularly by the media and new technologies, including the Internet, and full respect for the freedom to seek, receive and impart information can make to the fight against racism, racial discrimination, xenophobia and related intolerance, and reiterates the need to respect the editorial independence and autonomy of the media in this regard;

12. Strongly condemns any advocacy of national, racial or religious hatred that constitutes incitement to discrimination, hostility or violence;

13. Invites all Member States, organizations of the United Nations system, regional and non-governmental organizations and other relevant stakeholders to endeavour to fulfil, in an appropriate manner, the objectives set out in the present resolution;

14. Requests the Secretary-General to report to the General Assembly at its seventieth session on the implementation of the present resolution, and to recommend ways and means by which the United Nations system and the Secretariat could assist Member States, upon their request and within existing resources, in generating public awareness about the dangers of intolerance as well as fostering understanding and non-violence.